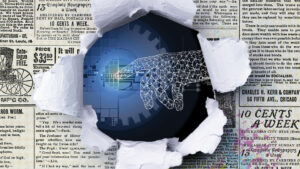 Does Print Advertising Work in a Digital Age?

What happens when you never advertised, a pandemic hits the country, and you’re looking to grow your business?

If you are like one of the major OEM suppliers of door components, you consider advertising of course!

At the beginning of 2021, the client contacted AIM’s sister company, Interline Creative Group, Inc. with an RFP. After careful evaluation against other agencies, Interline won the business and worked with the client to “break through” the clutter, including changing the image of the client from a major OEM to a major player in the security door hardware market.

The client wanted to use print advertising to do just that, and Interline turned to AIM’s proprietary database of readership studies and tracking advertising behavior from a variety of publications to plan and execute a comprehensive campaign.[1]

Part of the reason is that advertising is still an effective tactic if you use it correctly.[2]

The campaign itself was a testimonial campaign. The client found installers and integrators who were interviewed by Interline staff on how they utilized the client’s product. Stories were created around these individuals and their use of the client’s hardware components as well as new controller products that were being introduced into the marketplace. Professional photos of the individuals were taken, and all were assembled in copy-heavy ads that described for other integrators and installers the benefits of the client’s products.

Four key targeted publications were selected based on their audience demographics of who the client wanted to target.

In addition to the print campaign, AIM recommended utilizing Interline’s proprietary IP Reverse Lookup Code for the client’s website. This code is placed on a website on each page and tracks visitors’ IP addresses and their journey as they consume data. Unique codes were then placed on the advertisements to track incoming visitors from a specific publication to the website.

Interline’s experience in doing this type of accountability tracking – they once used 26 different 800 numbers to track print campaigns for a client – was extremely beneficial in understanding the target’s behavior to the messages. As visitors arrived on the website, Interline was able to tell AIM “where” they came from, how long they stayed, and what they consumed.

Interline referenced their blog – Should you sell to an individual or group – as the basis for such tracking.

Between May 1, 2021 and August 3, 2021 when the campaign ran, 112,217 pages on the client’s website were consumed. While 70% of the pages consumed came from public ISPs (i.e., Comcast, Verizon, AT&T etc.), many of the others were able to be identified and sourced as “leads” from the campaign based on their IP address.

AIM was able to document each company and their visits based on the tracking code from the advertisement in the publication. Over 500 unique companies arrived as a result of the advertisements.

“This is the only way to do this type of accountability,” explained Patty Fleider the Research Director for AIM. “Publications have done away with their reader service cards, and advertisers are left hanging. In fact, Nielsen, the TV Ratings Company, is being acquired for $16 billion, including debt, about a week after the TV ratings and marketing data company rejected a $9 billion offer. They just can’t keep up with the splintering of their audiences, so they’ve decided to ‘give up.’ So a company’s website becomes the single most important marketing tactic you have, making it imperative to know who is coming there.”

For example, one of the visitors from the campaign was one of the largest hoteliers in the world, consuming 119 pages as a result of this visit. This company not only had the client’s components on their public access doors, their facility people needed parts “on hand” when maintenance was required at multiple locations. This gave  the client an extraordinary opportunity to build new business for himself and his distributors.

“In other instance, we saw someone from a major company in Northern Illinois with a campus of over 25 buildings visit the website on a Saturday night and look at one page: a one-line diagram of one of the client’s components,” said Jim Nowakowski, Interline’s president. “In the sales meeting that following Monday morning, we explored and speculated on why that person came to the website. The only logical conclusion was that they needed a part. Subsequently, the client followed up with the facility manager for that campus and suggested a door audit for a preventive maintenance program. Advertising drove that awareness of where to look for that part and the follow-up proposal for the program.”

The testimonial campaign also gave way to what Interline calls the “product wrap” ad. A main ad on the page and then is “wrapped” with smaller ads each featuring a different component offered by the client. The main ad presents the featured “new” product, and the others, which have separate tracking website addresses for more information, flank the main product and giving the reader a “shopping” experience.

Measurement also showed “spikes,” which corresponded to when advertising was running in the magazines. The “spikes” are traceable to a company’s interest in the client’s products, because AIM tracked their “journey” on the website, and then with a little detective work, identified their interest and, finally, reached the individual with a few phone calls. In other words, lead generation. Companies that come to the website are from a publication audience, or from Google (we can tell which through follow up phone calls), are the result of our campaigns.

It seems that clients these days don’t want to extend such effort. They want to “take the order,” forgetting that creating the order is part of salesmanship.

The client was so satisfied, he put the company up for sale and subsequently sold the business at the end of the year for a profit.

[1] Please read How We Study Advertising on AIM’s website for a complete reference on their tracking capability.